Evocative, Exhilarating, Mesmerizing! Indulge yourself in the experiences of SOL 2014; Music, Drama, Film, and the Liberation of Performing Art.

Sounds of Lyons is thrilled to announce the 2014 season, September 12 through 14. Continuing with its genuine exploration of ways to make music accessible, available, and attainable for all, the 2014 season will feature three evening concerts, one outdoor free event, and a three-day workshop for children. 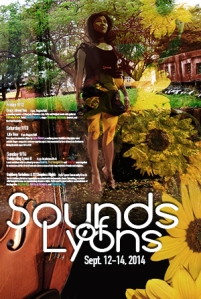 Local musicians with a national presence Taarka, The Songbirds and Granias come together to commemorate the Great Flood and share a sense of new hope with their friends and neigbors.

“B.A.M.M.” is the first Sounds of Lyons Musical Arts Program (SOL MAP) in collaboration with Integral Steps in bringing a rich combination of Biology, Arts, Movement, and Music to spark children’s creativity and cultivate their curiosity. Mark your calendar and stay tune for more information in the coming issues.

Here is a short retrospective of this year’s festival, please feel free to share around the world if you like it…

Were you there? Did you want to be but couldn’t? Have no idea but would love to see what it’s all about? Take a gander at our festival through this short retrospective, and come join in the fun next year…

To all our FB friends, please feel free to share all over the place..

Here is a quick reference of our programs this year, for detailed info click on the link:

A small taste of one of this year’s concerts, “The Kiss”:

A girl wandering in the woods, her home, seeing rivers, touching trees, day-dreaming (Ravel I). The dream takes place, the girl becomes a fairy (Szymanowsky-Rachmaninoff)), coming out of the shimmering water, pure and vulnerable, the weight of the world—life, death, illness, love, departure, sorrow, longing— starts chasing after her, she slows down, slows down, becoming aware of herself as part of the weight. But she wants to dance, dance, dance (Milhaud), to feel the exuberance still in her bones and in her flesh. She travels out of the woods, sees more, touches the sadness (Kaddish), feels the loneliness (Shostakovich), says if I just keep waltzing (Kreisler) and twirling into Oblivion (Piazzolla), maybe this decadence would be the truth. She was torn and terribly homesick. She went searching to find her way back, but instead it’s a long descend into darkness….

Girl wakes up, robbing eyes, to realize that this 45-minute nap is actually 20 years in life. She wakes up, seeing the man next to him, holding and kissing her (Ravel II). She gets up without waking him, she started tiptoeing, then bouncing and leaping, into the woods where she used to be a girl, pure and joyful (Ravel III). She knows it’s her heart singing and dancing. She is both the dream and the reality.

Posted by soundsoflyons  |  May 8, 2013 | Categories: Uncategorized | Leave a comment

Word from the Director

Season Five. There is something so satisfying in acknowledging this little music festival that has grown into a fun, spirited “being” embraced by many. It is with the abundant creativity and genuine curiosity of a young soul that Sounds of Lyons continues to explore the new territory of classical music, finding ways to connect, to dig in deeper, to reach out further, and to have the kind of fun that might be forbidden elsewhere!

Five years ago, it was a thought sprouted during one of the ruminating walks in Lyons, the air brisk but the heart warming with the possibility of a classical music festival alongside the much celebrated folk music here. Since I am part renegade, part experimentalist, and part naïve, mixing them up then you get a pretty decent combination to start a festival. Five years is not long, but we are growing vigorously during this time. Not only in our artistic attempts, but also in the result of how many people we have connected and journeyed together through music. Sounds of Lyons is being shared by the riverbank of St. Vrain, under the paintbrush of children’s imagination, in the authentic Rogers Hall, the gorgeous Wildflower Pavilion, and Lyons Community Church that is elegant and moving in its simplicity. In fact, Sounds of Lyons has been filling music all over town, engaging students, singers, artists, dancers, poets, theater aficionados, people young and old, seasoned and new, to music of Beethoven, of Benjamin Britten, of Petoris Vasks, or Steven Reich, of the fantastic world of sounds and sensations and expressions ready to be discovered, to be immersed in. For all that, I am proud to say that we have had a great five years under our wing.

Now into 2013, with three productions that draw on a variety of artistic languages, each with its own powerful content in an intimate setting, we are continuing with our exploration of new possibilities within classical music. It will not die. In fact, with our genuine efforts classical music will continue to grow, to thrive, and to inspire. Come join us on June 14-16 for the fifth season that starts with two shows of the fiercely eccentric Carmen, the visually stunning and aurally luscious The Kiss, and the internally illuminating Passage. My deepest gratitude for those that have helped shape and support the festival: Lyons Community Foundation, Boulder County Arts Alliance, Lyons Merchantile, Lyons Arts & Humanities Commissions, Lyons Lions Club, Oskar Blues, Lyons Farmette, Lyons ReRun, Barking Dog, Experience, The Stone Cup, Dan Siddell Realty, Jonelle Tucker Realty, Urban Oasis, Roger Peirce Piano Service, Lyons Community Church, Lyons Community Montessori, and Planet Bluegrass.

The mission of Sounds of Lyons is making arts available, accessible, and attainable to people of all walks of life. Season Five is being proudly presented, with gusto, excitement, and lots of gratitude.

Posted by soundsoflyons  |  May 7, 2013 | Categories: Uncategorized | Leave a comment

We are excited to announce a brand new season with an amazing line up:

Children 3 and up gather to express and create art together while listening to live performance, discovering the birds, river, and the colorful world in music.

Sit back and enjoy the serenades and divertimenti by Dahnani, Mozart, and Beethoven.

10 am- Music on Canvas: Children’s concert, paint with live music! Discover “river” in Schubert and “bird” in Haydn.

11 am-Music on the River: Sage Quartet brings you music of Beethoven, Schubert & Dvorak.

All events are held @ Bohn Park and free to the public

What a Festival! It’s hard to believe that Sounds of Lyons 2011 has come and gone already. Fortunately, this year we have some amazing video of all the concerts. You will be able to watch each segment in its entirety, as we get them put up on Youtube over the next couple of weeks. Right now there are three videos up from the Friday night concert. If you want to watch in order, they are numbered starting with “1”. Check out our Youtube channel and keep checking back for new updates.